We transferred our embryo just over two weeks ago.  There is a reason the two week wait is also know as two weeks of hell.  During the last two weeks I have experienced more emotions than I ever thought possible.

The first few days of the two week wait I swung from ‘this can work’ to ‘this is never going to work’.  Two days in and I sat sobbing, saying that I’m never going to do this again, it is just too hard.  And then some positivity appeared.  But at the same time, I was gripped by fear.  All of the previous 6 cycles where it hasn’t worked kept coming back to haunt me.  The drugs probably playing havoc with me.  Oestrogen patches, progestrone injections, blood thinning injections, steroids, a conception vitamin pill and vitamin D became my daily routine.

I went for a counselling session 5 days after transfer.  I needed a sense of perspective and I needed to try to calm down.  I just couldn’t settle or concentrate on anything.  I talked things through.  It became apparent that my anxiety levels were sky high and I needed to try to take back some control.  Most of all I needed to breathe.  I came away from the session feeling much lighter, I had been able just to talk about living through another two week wait.  How hard this time is and how much it messes with every single part of you.  The will it work, wont it work, playing over and over, like a broken record.

6 days post transfer I was in the shower and I felt a sudden wave of nausea.  This was new.  By this point in previous cycles I had started to bleed.  So far, no bleeding.  I got through the day with something in the back of my mind niggling at me…this may have actually worked.

7 days post transfer and I caved and did a pregnancy test.  The First Response was calling my name…shouting pee on me from the bathroom cabinet.  And so I did.  Slowly but surely a faint second line appeared.  For the first time in 12 years of trying to have a baby I saw a second line, a positive test.  I took it to show hubby, just to check I wasn’t seeing things.  Nope, there was a definite second line.  Hubby cried, I just stood there completely numb.  This had actually happened.  I’m really not sure how I got through the day.  All of a sudden, hope had returned.  I was pregnant.

We were cautiously happy.  I was completely in shock.  I was also expecting it to end any second. I continued to test each day, knowing we were still 5 long days until the official test date.  Anything could happen, there were no guarantees that it would continue.  Over the coming days the second line appeared quicker and darker each time.  10 days post transfer I braved a digital test.  I have only ever seen the words Not Pregnant and part of me was expecting to see them again.  Still no bleeding, feeling more nauseous I took the test.  Then words I never expected to see appeared…Pregnant…closely followed by the words 2-3 weeks.  Holy shit.  The test the next day was also positive, as was the one on official test date.

I made the phone call to the clinic.  The nurse asked me what the result was…positive I replied.  I wanted to burst.  This was actually happening for us.  She booked us in for a scan for 3 weeks time.  Now, we just had to get through the next three weeks.  We moved from the torture of the two week wait to a new torture of the three week wait.  Not sure how we were going to get through but finally it felt like this was going to happen.  Cautiously happy but we were now starting to get a little bit excited that we would be having a baby in the middle of November. 10 years after being told that we would just need a little help to get pregnant, it finally felt like our dream was within reach.  I went for another counselling session.  It was clear that I was in shock.  Although it was the outcome we both wanted more than anything, I never actually believed it would happen.  I talked about all of the things I feared, most of all I feared that this wouldn’t end well and that I would be broken once more.  As ever, the session provided some perspective.  I started to actually believe that this was happening.

Two days later at 14 days post transfer I did another test.  Clearly I had turned into a pee on a stick addict, but why not?  As much as I feared seeing a negative, I loved seeing the positive, the 2 lines or the words pregnant.  This time it said Pregnant 3+ weeks.  Eeeek things looked to be progressing as my HcG levels were rising.  I moved from living in a constant state of fear that I would start to bleed at any point, to living with some hope and happiness that we were finally going to become parents.

It’s frightening how 24 hours can change everything.

15 days post transfer at lunchtime, I went to the bathroom and I had started to spot.  My heart beat out of my chest, my stomach sank and I felt sick.  I knew this wasn’t a good sign.  15 minutes later and I had a huge gush of blood, bright red blood.  I rang my boss and told her I needed to go, I left the meeting I was in and drove home.  I cried all the way home.  I knew this was the start of the end.  How could this be happening?  Why me?  Why us?  What have we done to deserve this?  How can life be so cruel?  How are we going to get through this?

I managed to get hold of hubby on the phone.  There is something utterly devastating in having to tell the person that you love most in the world that our dream of a family is probably over.  I could barely speak for the tears that were flowing.  My heart felt like it had been ripped out.  Hubby phoned the clinic and they asked me to go in for a blood test.  I would then need to go for another one 2 days later to see if the Hcg levels were rising or dropping.  The bleeding had subsided and was now back to spotting, but still I knew it wasn’t right.

Blood test taken, no false hope from the nurse, simply a time will tell type conversation. Back home we just couldn’t speak.  Dr Google became my new best friend but also my worst enemy.  So many stories of pregnancies progressing even with spotting.  I couldn’t grab onto that hope.  I needed to be realistic.  I started to send the message out to those few people who knew we had a positive result to prepare them for the worst.  Those closest to us clearly as devastated by the news as we were.  I hate that we keep putting people through all of this loss and grief.  Its just too hard.

The next day the bleeding had definitely turned to very light spotting.  OK, so maybe things could be ok.  The clinic called, my Hcg levels were at 3000, which for 5 weeks pregnant is in the middle of the normal range.  The nurse said we would need to carry on with the drugs, take another blood test tomorrow and hope that the bleeding stayed to the minimum but it would just be a matter of seeing how it goes over the next few days.  As the phone went down, I felt utterly deflated.

Within 10 minutes of the phone call, I had the most horrendous period pain.  I knew it was over, I knew what was coming next.  An hour later, I was literally pouring with bright red blood & I started to pass huge clots.  It is definitely over.  Whilst we wait for the blood test to confirm, in my heart I know it is over.   I have never felt so broken in my entire life.  The tears just keep coming and coming.

Embryo 13 on transfer cycle number 7 hasn’t survived.  Our hearts are literally shattered.  I do not even know how we start to grieve, to heal or to start to recover.  I have no idea where our strength will come from to get through the coming hours, days, weeks and months.  There are no words.

To our bean…for the very short time you were with us, we loved you more than we ever thought possible and more than you will ever know.

You will be in our hearts forever xx 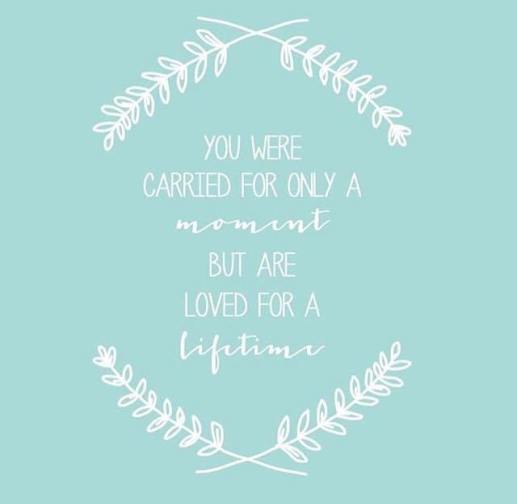 32 thoughts on “From hope to heartbreak…”